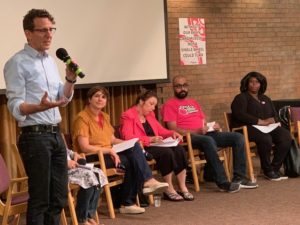 Precarious employment is never far from the minds of those in journalism.

Even for those lucky enough to still hold full-time jobs, staff at most news outlets wonder when the next round of layoffs is coming. Rarely does a day pass when one’s Twitter feed doesn’t have at least one former staff journalist announcing their return to full-time freelancing and asking for leads on work.

Over the years, freelancers have had more and more company in precarious employment of all varieties. But even as the Ontario government erodes labour protections and as the federal election approaches, there’s reason for hope.

With employment activists working in communities to build better jobs and workers in several app-based jobs voting to unionize, precarious workers in Ontario are developing a better awareness of their situation and working together to change it.

Representatives from several groups gathered in west end Toronto on June 26 to discuss their strategies and hopes at an event called Worker Rights in the Gig Economy. Panelists at the event included former and prospective NDP MP Andrew Cash of the Urban Worker Project, United Way policy worker and researcher Stephanie Procyk, organizer Nadira Begum of the Workers’ Action Centre, the CMG’s Lise Lareau, Foodora couriers and union organizers Ahmad Jarbou and Ivan Ostos, and Jan Simpson, president of CUPW (with whom the Foodora workers have opted to unionize).

Hours after 300 Uber drivers in Toronto announced their unionization with United Food and Commercial Workers, the UFCW’s Pablo Godoy was also able to make a last-minute appearance to speak to issues facing the drivers.

Unionizing precarious workers was the major subject of discussion for most of the panel. “With the rapid advances in technology, our regulatory system that protects workers has not been able to keep apace with the changes,” Cash told the audience.

“We’ve had 35 years of what people call neoliberal governments where regulations have been weakened, worker rights have attempted to be dismantled and there’s been a focused attack on unions.” 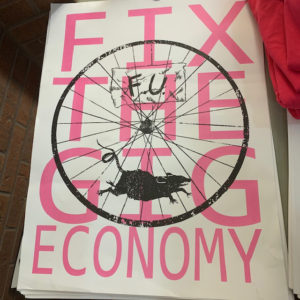 Cash’s Urban Worker Project helps, in his words, “self-employed, freelance, people working on contract, juggling multiple part-time jobs: people outside the legal employee/employer relationship – in other words, most of the people in this room.”

Cash and organizer Nadira Begum of Toronto’s Workers’ Action Centre both work on the ground with organizing workers in non-traditional employment.

Begum was candid about the concerns of the people she’s worked with, organizing in her own Bengali community and other immigrant communities in St. Jamestown, Scarborough and North York.

She’s concerned about the impact of the hard-won labour laws Doug Ford’s Conservative government has put an end to, policies around scheduling, pay raises, paid sick days, equal pay for equal work, and oversight of companies hiring through temp agencies — all issues that deeply affect the low-income and newcomer workers she assists.

“For those of us in the media and and entertainment industry, this is not a new thing,” said the CMG’s Lise Lareau, who works with the Fairness in Factual TV campaign. The campaign is fighting to give workers in reality TV the same protections other workers in the film and television industry have through their respective unions.

Lareau highlighted issues like unsafe working conditions, long hours, unpaid overtime and unreasonable contracts. Factual TV workers being excluded from the labour protections the rest of the industry has was “just was allowed to happen,” she says.

“Independent contractors don’t have a lot of ways to unionize,” Lareau said, but as other panelists mentioned, anyone can sign a union card, and many have been finding ways to organize workers. 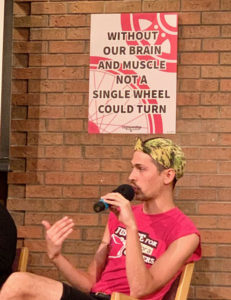 Justice for Foodora Couriers is a group of bicycle couriers working for the Foodora app who voted to join the Canadian Union of Postal Workers in May.

Couriers Ahmad Jarbou and Ivan Ostos were there to speak about the union drive and their own experiences.

While both have been working for Foodora for several years and enjoy their work on the whole, they want Foodora to grant them employee status. That would bring a requirement of pay for time worked (instead of only travel distance between a restaurant and delivery address), benefits, scheduling, and protections around injury on the job.

Jarbou spoke about his experience as a newcomer courier with a background in electrical engineering, arriving from Syria in 2016. He described the difficulties faced by the many newcomers working in this area, including long commutes and difficulty establishing a life in a new country because of the precarity of this work.

“New migrants, people in artistic backgrounds, students – all of those people are at a disadvantage because they are far less likely to go to their employer with any issues,” explains Ostos, who started working for Foodora when he was a music student.

“This work is not going away. It’s fair what we are asking…everything people in the past have fought for.”

“More unions need to come to the floor”

Shortly after Uber workers announced their own union drive with the UFCW, Pablo Godoy of the UFCW made an appearance at this event to speak about the drivers’ situation.

“More unions need to come to the floor, policies don’t exist in a meaningful way to protect workers in this area,” he said. “All these apps are employers. These tools are simply management tools.”

Many millennial workers feel understandably distanced from the labour movement — some are in two-tier workplaces where older workers are protected by union contracts while younger workers struggle to have their positions made permanent. Those of us raised in Ontario grew up with mixed messages around teachers’ strikes under Mike Harris’ government.

It was refreshing to hear several people speak about this disparity, including audience member Tim Maguire, a former City of Toronto worker and CUPE local president. He said, “There’s rampant inequality within unionized workplaces – it’s another strategy of employers to attack employment security.”

“Somewhere along the way, the labour movement became inaccessible to most people,” Pablo Godoy says.

“Right now the gig economy is very hard to organize in. CUPW and the work that we’re doing have been able to make a bit of inroads, and I think that we have to continue working together and having these conversations,” CUPW president Jan Simpson said.

It’s clear that developing a larger conversation and including precarious workers in all industries is the key to empowering workers and ensuring that employers and legislators understand the deep impacts of precarity and income inequality.

Laura Kenins is a Toronto-based freelance writer who has written for CBC, TVO, the Globe & Mail, Quill & Quire, and The Coast, among other publications. Follow her on Twitter at @birch_control