When Ross Perlin told his grandparents about his first internship, they thought he was becoming a doctor. And fair enough—until the 1970s, the word “intern” primarily referred to freshly minted MDs practicing under supervision. And they were always paid.

Perlin, author of Intern Nation: How To Earn Nothing and Learn Little in the Brave New Economy, was speaking at the Pay Your Interns Summit in Toronto on March 12. The event was organized by filmmaker Cynthia Pandev and included a screening of her film Pay Your Interns!

Today, Ontarians—especially those in female-dominated fields like nursing and education—complete 100,000 illegal unpaid internships each year, said Schenella Pinto, director of research and labour policy at the Canadian Intern Association, in the panel discussion following Perlin’s lecture. Under provincial law, unpaid internships not part of an academic program are prohibited unless they meet six strict criteria, including not benefitting the employer in any major way.

But unpaid internships are “saving companies in the U.S. something like $2 billion a year in wages,” Perlin said. “As internships have gotten global and are now in every country you might think of, that’s billions and billions that are being saved in labour costs.”

That ties into employers’ changing attitudes, he added. Internships spread into corporate America in the 1940s, but they were paid transitional periods between education and work, and employers focused on recruitment. But today, such precarious work is normalized.

“The concept that employers or governments or societies would invest in young people as a group begins to fall by the wayside,” Perlin said. “The emphasis is on you, the individual, need to invest in yourself, and if that requires extended periods of unpaid work, so be it.”

But it’s not all bad news. Perlin points to co-op programs as a viable bridge between school and work. Seventy-nine post-secondary institutions in Canada are members of the Canadian Association for Co-operative Education, which requires academic oversight, remuneration from the employer, and placements that are productive rather than observatory.

At the University of Waterloo, student Stephane Hamade said during the panel discussion, 16,000 students participate in co-ops each year, and 98.9 percent are paid. The university, a CAFCE member, is working to further increase that number, and help more arts and humanities students find placements.

Unions can also help. Katherine Lapointe, an organizer with the media union CWA Canada, runs the associate member program, which helps interns, freelancers and other precarious workers advocate for their rights.

“It’s common for emerging media workers to not even be working for a wage,” Lapointe said, “but for exposure and for the chance that it will lead to paid work in the future.” Young writers and photographers are also often told they’re lucky to have any work at all, which has “normalized unpaid work in the media… and companies are taking advantage of that.”

Taking advantage of young workers in any field isn’t hard, since Ontario doesn’t strictly enforce labour standards, said Andrew Langille, general counsel for the Canadian Intern Association. Of the 200,000 employers in Ontario, proactive inspection blitzes cover roughly 100. The Ministry of Labour, which Langille calls “incompetent, for the most part,” does not accept anonymous complaints.

To graduate from my international development program, I need to complete an internship. Most opportunities are abroad and unpaid, and finances are an issue. What should I do?

Is it okay to work for nonprofits that make very little money and are doing something I really believe in?

“Just because someone is a lefty or they have social justice values, I think that’s a really shitty excuse” for not paying people they hire, Langille said. “I think that line of thinking has been used by any number of ‘progressive’ organizations to engage in really terrible labour practices… If you cannot meet the minimum floor of rights that is set out in our laws, then don’t hire people. There’s no reason these people have to bring on interns.”

Lapointe was a little more sympathetic, pointing out the difference between unpaid work for a nonprofit giant like Amnesty and a grassroots campaign. “Just in the context of media, at an event we held last year, one of the freelancers that was speaking at it, Septembre Anderson, said, ‘I’m happy to work unpaid as long as no-one else in the organization is getting paid.’” 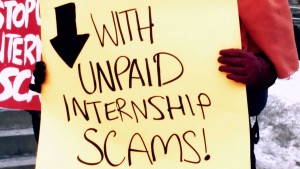 Photo by Cynthia Pandev, from the film Pay Your Interns!