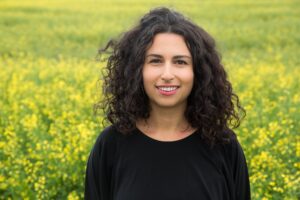 Her Maisonneuve feature “The Hand That Feeds You,” which is about the impact of the pandemic on migrant farm workers in Canada, is one of the winners of the 2020 Dave Greber Freelance Writers Awards.

The piece originally started as a course project for an advanced non-fiction class during her Master of Journalism degree at UBC — a class taught by 2008 Greber Award-winner Deborah Campbell.

Bianco took the time to speak with Story Board recently about the challenges of freelancing during a pandemic, the best opportunities for freelancers just starting out, and the importance of writing about what matters to you.

Why did you decide to report on migrant farm workers in Canada?

There was a daily news story, it was this report called Beyond Our Plates and it came from one of the migrant advocacy groups. It was personal stories of migrant workers, one of them getting his finger cut off and being told to go back to work, those kinds of things. And it inspired a kind of outrage in me.

So it really started with that emotion. I didn’t know that this was happening to the extent it was. I didn’t know how many temporary foreign workers were on the ground in the Lower Mainland at the time. I didn’t know that, in some cases, it was as exploitative as you read about south of the border. And so I was a little bit shocked. And also, I grew up on a small farm in B.C. so it kind of hit me.

It was going to be just a character study of these temporary foreign workers, once I could get into that world. And that came through Raul Gatica. He’s a character, to say the least. In the piece I write that he hung up on me the first time I called him. He’s kind of larger than life. Everything he said was quotable. Through him I met a few of the other workers and it was going to be a series of scenes of their lives. And because Raul came to Canada as a political refugee I thought it would be a really interesting profile piece.

And that’s what I pitched to Maisonneuve and they accepted it last October. But then they got back to me in February saying there’s now a literal plague and farmworkers are stuck, they’re in this kind of limbo zone and we could be cut off from our own food supply if we can’t get the crops out of the ground.

So they asked me to gut the story. Keep the main scenes but start with this new question, which was “if we turn back time and none of the agreements that we had had existed, and Canada was forced to contend with their own labour supply, what would have happened?”

So I went back to all the sources, I got some new experts to give their two cents and it became what was finally published. But it was very, very difficult. It was like doing a full house renovation instead of just tearing the house down and starting from scratch.

I started writing the piece in 2018 and then I put it on the back burner because I started working at the CBC in Victoria and I just felt like I didn’t have the energy for it. I was a little bit nervous to pitch it out. I didn’t know if it was any good. But I’m glad that I went back to it.

You’ve been freelancing for about two years… what have been your biggest challenges so far — especially during the pandemic?

Well I will say that I’m 100 percent freelance but it’s not 100 percent journalistic. I would say I’m doing 50/50. I’m also copywriting for a non-profit organization and doing academic proofreading. I feel really grateful for that because that’s kept me going and allowed me to write more creatively on the side.

But it’s been really tough. I don’t have any easy answers. It was incredible hearing that I’d won this award because I was kind of at a crossroads where I didn’t know if I would continue in journalism, if I would just go full time communications. And so it was very motivating.

There was another piece that I was writing and I pitched to probably 20 different outlets and so many of them told me that they had cut their freelance budget completely so they could keep staff on during COVID. Which I completely understand. But it’s also a little bit demoralizing.

This is something we don’t talk about enough. I know they wanted to inspire us to do great things in the school of journalism, but this idea of pure versus un-pure journalism and this idea that if you go to “the dark side”… I’m not saying that the copywriting I’m doing is that, but you have to find a way to survive and if that means doing something that’s not purely journalism, I think it’s okay. And especially this year. I don’t know if it will be like that next year, maybe I won’t have to, but for now I do.

And it does take time and building relationships and that’s starting now for me, and that feels really good. I’ve been writing for Montecristo in Vancouver and they want me to write more, especially if I’m going to be in Europe a little bit longer, kind of dispatches from over here.

Your award winning story is labour journalism, is that something you want to do more of or are you looking to be more of a generalist?

I would have loved to have written a few follow up pieces to that story because of the relationships that I built with the sources, but not being in Canada made it really difficult. But I also do see this story as being story about food and that was something that I really wanted to start with when I started the Masters program.

And not that it wasn’t seen as serious, but food can also be seen as fluffy and maybe a little bit superficial. But it’s the thing that sustains us. It’s so important and political. The last story I wrote was a piece about this Norwegian chef who had to close down their Michelin star restaurant during the pandemic. And because of the way the Norwegian state is, they were able to lift themselves back up and they’ve survived through at least the first wave.

So I like stories like that, restaurant profiles, more lifestyle journalism. But I don’t really have a beat yet.

Where do you see the best opportunities for freelance writers these days?

I see a lot of freelance journalists starting newsletters. And I follow a few people who are great and that’s the best thing to wake up to in the morning. And there’s money in it, too. I think it’s also partly to do with social media following. If you have a huge Twitter or Instagram following that’s definitely helpful to get a newsletter off the ground. That would be a really good way to supplement what you’re doing.

And, I mean, I try to shoot for the stars. I’ve been rejected a million times from trying to pitch The Guardian or the New York Times. But I feel like mid-range outlets like Montecristo, they pay really well, they’re always looking for writers and if you want that stability or reliability I think smaller online publications like that are a really good place to start. And that’s where I’m at right now.

What do you think freelance unions should be doing to support and advocate for freelancers?

We had a representative for the union come to speak to us in our Masters program [editor’s note: It was CFG organizer Don Genova]. And that was the only lecture we had about fighting for your rights, and kill fees and and transparency around price per word or what you’re charging. So maybe it’s just more education in schools that’s needed.

I was really surprised that the Dave Greber Award was the only award for freelancers in Canada. I know we have Canada Council grants for a whole host of things, but if there could be grants that writers could apply for as freelancers, that would be really great.

Any tools you use in your work that you’d recommend?

I use my journal. I use Notes all the time, the Mac app. And I use Otter, which I love, for transcription. You can also record on Otter. So that’s my go-to almost every day. You still sometimes have to go back and edit through but it’s really, really good. It saves a lot of time.

[There’s also] this crowdsourced list of which publications pay freelance writers and how much. It’s been a fairly accurate measure for me and it may be helpful for the readers of Story Board.

What did it mean to you to win the Greber Award?

It was incredible. I was really at this crossroads where I didn’t know if I would continue as a freelancer. And so it was kind of everything. Shirley Dunn [the founder of the Greber Awards] signs every email with “keep writing.” And I almost broke down and cried when I saw that because it was a thing I needed to read. It was so simple, but it’s what I needed to see at that moment. So just that little sign-off was enough.

What’s your best advice for new freelancers just starting out?

I think if you write what you love, it’ll come across on the page. Even if it’s not first person, even if it’s not an opinion piece. I think that that is a really good thing.

And also, going back to the story that I wrote, just starting with people on the ground who are living through a thing, even if that is a person who is an expert or an official source. I think that’s a really strong foundation to start with.

*This interview has been edited for clarity and length.