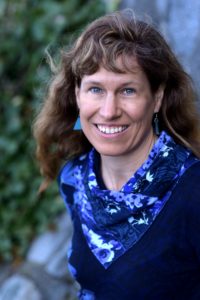 Lesley Evans Ogden is a B.C.-based science journalist whose clients include Natural History, Scientific American, BBC, Nature, and CBC. Her work can also be found here on Story Board.

She just finished her first documentary for the Nature of Things, called Stay-at-Home Animal Dads. One of her current projects is a World Conference of Science Journalism Fellowship profiling Simon Fraser University associate professor Wendy Palen.

She took the time to speak with us recently about the challenges of managing multiple projects, how to keep your energy levels up, and the importance of aiming high with your pitches.

Why do you freelance?

The primary reason is that the flexibility is something I really love. And I also love being my own boss. I can basically just follow my curiosity. Provided I can convince an editor that it’s a story that is worth writing, then I can work on anything that piques my interest.

You seem to always have a lot of different projects on the go at the same time. How do you keep track of them?

I keep track of them in various different ways. As soon as I have an assignment that comes in, I put a reminder in my calendar and I usually set reminders for the day before, the week before, two weeks before, depending on the time frame.

But I also have a chart on my wall that has all of my assignments on it. And it has deadline date, topic, venue — as in what the publication is — and the number of words. So it’s right there all the time, right behind me as I’m working. It’s an Ikea glass board that I keep all my assignments on.

And how many assignments are on there at the moment?

Well at the moment there are a lot of assignments that are done that are crossed out. So right now I don’t have any current deadlines in the near future. I’m sort of in a phase of waiting to hear back on a lot of pitches.

So I have several pieces that are in production that are submitted but I don’t have any imminent deadlines on my board right now. But I have on the board 13 that are either crossed out, that were finished and have been paid for or finished and waiting to get paid for. And a few deadlines months away.

Do you have a goal of having a certain number of pieces in the pipeline?

I do. I keep a spreadsheet of all of my assignments and I keep track of which ones have I been paid for, what money is expected in the future from assignments that are coming up.

And then I don’t really adhere to it closely but I have two totals in mind — one is the amount of money that I’ve made so far in the year and the second total is money that’s expected from already confirmed assignments. And if that number is below a certain amount, then I know I need to go and do lots of pitching.

And where are all of your pitches coming from?

Well because I cover science, I have signed up for table of contents alerts for lots of different scientific journals that fall within the beat that I cover. Plus I get a lot of scientific press releases.

But in recent years, whenever I write an article or produce a documentary I will contact the sources that I talked to and send a copy of it to them and then if they reply and say “good job” then I’ll email them back and say “Oh and by the way I really enjoyed covering your work, would love to follow up with you. If you have any new papers coming out please let me know.”

And more and more often they do. So I often hear from scientists in advance of when they publish a paper, which is a real advantage as a freelancer. It gives me some lead time to really get a jump on that story.

But also sometimes ideas just come to me for random reasons. Like I go for a walk in the woods and I see a weird type of frost that I’ve never seen before and then I want to find out about it. And that turns into a story.

It sounds like relationship-building has been an important part of your freelance career.

For sure. And that’s been really facilitated over the past couple of years because I’ve been lucky enough to get several journalism fellowships, which allowed me to attend conferences. Those conferences have been really great in terms of building relationships with scientists and other science journalists.

What’s the best thing you’ve ever done for your professional development?

I would say applying to and being successful at getting journalism fellowships has been enormously valuable. In my professional goals for the year it’s always my goal to try and get at least one fellowship per year.

And I have managed to achieve that in the last several years. Sometimes more than one per year. And so for example, one fellowship that I applied for took me to Berlin to a really cool conference that was held in conjunction with the 25th anniversary of the fall of the Berlin Wall. And it was called Falling Walls, it was basically about scientific breakthroughs.

And I’ve been to several Compass fellowships. Those are also fellowships I’ve applied for.

I’m currently working on a fellowship from the World Conference of Science Journalists, which is a really interesting policy fellowship. Basically there are six journalists from six different countries that got this fellowship to follow a scientist over a period of a whole year. And the aim is that science policy is a really under-covered, under-reported area of science because it has a tendency to be fairly dry, it’s hard to engage the public interest on it.

So this fellowship was set up to try to get more journalists involved in covering policy and then they’re publishing a series of three profiles from each science journalist over a period of a year.

What do you think are the biggest challenges for freelancers at the moment?

I would say one is crappy contracts that put us at high risk in terms of indemnity clauses. I think that has a tendency to scare journalists away from really important and potentially risky stories. So that’s one issue.

The other one is just getting paid on time.

And I guess another one is just keeping up the energy level when you have no guaranteed paycheque and it’s always about hustling and pitching. Just maintaining that level of energy and enthusiasm can be wearing.

How do you keep your energy level up?

I think in terms of maintaining my energy level, for me it’s important to have some times when I switch off. I’m not checking email, I’m not on social media, I’m just out for a run, going for a hike in a beautiful place. Just unplugging from the relentless internet and recharging the batteries.

What supports do you value most from your union?

What I value from the union is support on things like contracts, webinars — which I seem lately to be all excited about signing up for and then something else comes up and I haven’t been able to attend!

And also just the feeling that we’re not alone, that there’s a community of people that are experiencing the same challenges and issues that you can connect with.

What’s your best advice for freelancers who might just be starting out?

I would say networking is really important. When I first started, I was making the transition from being a scientist to being a science journalist. And I didn’t know any other science writers. Nobody. And I found out there was this organization called the Canadian Science Writers Association. I heard they were having a meeting coming up in Calgary and it was only a few months away and I thought “I should really get myself to that meeting.”

I didn’t know a single person at the conference and it was very intimidating, but I went, and I actually immediately found a sense of community. It was very welcoming and I made a lot of valuable connections there. So I would encourage freelancers starting out to find communities that are relevant to the kind of freelancing they want to do and join them and get involved.

For all of those kinds of community building activities, they won’t earn you money but they will earn you valuable contacts and opportunities.

The other thing is just saying yes to opportunities and then figuring out how to do it later. I was asked to speak on a panel at a National Association of Science Writers meeting in Washington in October. I was contacted because they were looking for a freelancer that would talk about using Twitter.

So I said “yes I’m interested but only if you have a travel budget.” Because this was a meeting I wanted to go to but I couldn’t afford to go to it. And they got back to me and said “yes we can pay your airfare and hotel.” So I said yes, and I went to Washington, DC and talked on this panel about using Twitter. I had severe imposter syndrome but I just did it anyway.

And so that’s one thing: just say yes and figure out how to do it afterwards. Be bold.

One of the things I think has helped me is I’m not afraid to aim high and just try pitching places that might seem really impossible to get into. Because what’s the worst thing they can say? “No.” Or not even reply.

But if you’re relentless enough with your pitching and your determination, you just keep trying. And it doesn’t matter how many people say no, all you need is one person to say yes and then you’re on your way.

*This interview has been edited for clarity and length