Most magazine writers and newspaper journalists think about writing a book at some point in their careers. Maybe it’s a deeper dive into a story that was part of a feature package, or a biography of an important event or persona in Canadian life.

Recent non-fiction books by Bruce Kirkby, Justin Ling and Bob Joseph took very different paths to get into print and show how fractured and complex the book publishing landscape is right now.

None of them followed the traditional agent/proposal/advance sale that has been the norm until recently.

Persistence… and an agent’s assistance 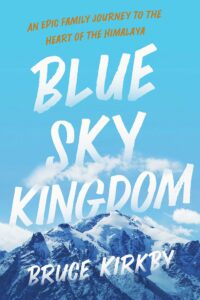 Although he graduated from Queens University in engineering physics, Bruce Kirkby has fashioned a professional career as an adventure travel writer based on impressive exploits like crossing Oman’s Empty Quarter by camel and making the first rafting descent of the Blue Nile Gorge as part of a National Geographic team.

He’s a bit of a media polymath; in addition to book and magazine writing, Kirkby hosted No Opportunity Wasted, a reality TV show that aired on CBC and he does corporate speaking engagements throughout North America.

His newest book, Blue Sky Kingdom: An Epic Family Journey to the Heart of the Himalaya, (Douglas & McIntyre, 2020) proved to be his most challenging creative endeavour yet.

As an antidote to the endless restlessness of “always-on” modern Canadian life, Kirkby, his wife Christine and their two kids Bodi and Taj journeyed (by canoe, ocean freighter, rail and on foot, but not jet!) to a remote village in the northern Indian state of Zanskar, living as guests in a Buddhist monastery for three months.

Kirkby didn’t have a book deal in place before leaving for India and wasn’t even sure he’d write one afterwards. To hedge his bets, he took the risky, and, he admits, not always comfortable step of having an Australian film crew come along to document the trip for a multi-episode reality show called the Big Crazy Travel Adventure which aired on The Travel Channel in 2018.

“I’d submitted a manuscript (to McClelland and Stewart) for another book before leaving for India and found out near the end of the trip that it had been turned down,” Kirkby says. Wanting something “more original”, Kirkby spent several years writing up his Zanskar adventure only to have M&S eventually reject it. “I didn’t take on a single writing assignment in that time and focused exclusively on the book,” he says.

Kirkby’s literary agent John Pearce stepped in and sold Blue Sky Kingdom to Vancouver-based Douglas & McIntyre. Kirkby laments, “That sale took place after five years of writing, meaning that I made about 0.0237 cents/hour!”

Kirkby abhors the pitching and negotiating process that’s part of the writer’s life and is grateful that Pearce, who purchased one of Kirkby’s earlier titles when he worked at Random House Canada, was able to land a deal. 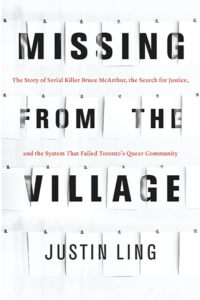 In 2015, Justin Ling was working for Vice Canada when he started investigating the murder of three men in Toronto’s Gay Village two years earlier. Although the Toronto Police Service suspected that the killings might have been linked, it was one of those stories that seemed to fall between the cracks of Canada’s mainstream media until Ling’s Vice story was published in 2017.

In 2018, the Toronto Police Service re-opened its files and later arrested Bruce McArthur, a local landscaper who was well-known within the gay community. During that period, Ling was hired by the Globe and Mail solely to report on McArthur’s horrific serial killing spree.

Ling says he was “pretty burned out” by the time McArthur pleaded guilty and “I generally find the whole True Crime space to be awful.” But shortly after McArthur’s conviction, two things happened that would deepen his involvement with the story. Robin Doolittle, a colleague of Ling’s at the Globe and the author of Crazy Town: The Rob Ford Story, gave Ling her agent’s card.

Then, as fate would have it, CBC called to offer Ling the chance to create a podcast. (Ling’s career had begun as a radio journalist and he had done freelance podcasts previously). He says, “My initial reaction again was to turn them down, but then I realized that there was space to chase something that deserved a little more attention. So, I fell into both the book and the podcast without fully intending to.”

Ling was conscious about not rehashing his earlier stories when the time came to write the book. “I was able to go back and use files that hadn’t been in my earlier reporting or the podcast,” he says. Missing From The Village: The Story of Serial Killer Bruce McArthur, the Search for Justice and the System that failed Toronto’s Queer Community was published in March, 2020.

Build an audience through blogging

Since 1994, Joseph has owned and operated Indigenous Corporate Training, a highly-successful consultancy that teaches companies and government agencies effective strategies for engaging with Indigenous people. He’s facilitated training courses in many different countries that experience cultural and ethnic divisions.

He says, “in 2014, we revised our corporate website and the webmaster asked me if we wanted a blog. I didn’t really know what blogging was at the time, but I enjoy writing and so I started putting down some of the lessons I’ve learned over the years.”

The blog took off when Joseph began using Hubspot, the in-bound marketing software platform. “I always thought that to build a successful business you needed to play your cards close to your chest and Hubspot teaches the opposite; if you share your knowledge then people will become curious and buy your product,” says Joseph.

Hubspot users are encouraged to blog regularly so that their services—in this case Joseph’s consultancy—will rank higher in Google’s search engine page rank. “My website is custom-designed so that every visitor sees a different page, depending on their reason for visiting,” he says.

Over time, Joseph simplified his writing to make the history of Canada and First Nations people more accessible to all Canadians. He approached Page Two, a Vancouver-based publishing consultancy that’s made up of several former industry professionals who help market and sell your title.

“They were very excited to work with me because I already had an audience for the book,” he says. “Their expertise is in design, editing and distribution. You maintain a larger percentage of the book sales, but you have to pay them upfront for those services.”

Page Two’s list is heavy on the motivational (Dream Bold, Start Smart!) and self-help (The Art of Holding Space), but has also published serious business titles that have been nominated for national awards (Railroader, by Business News Network’s Howard Green).

Few writers have the wherewithal to pay someone to publish and distribute their own book, but if you’re already a subject matter expert in a certain field and are confident in your topic, then Page Two might offer a credible alternative to self-publishing or e-books. Writers know that time is money, and the process of finding an agent and obtaining that all-important advance to kick-start the writing process might be more trouble than it’s worth.

It has certainly worked for Bob Joseph; three years after its release, 21 Things You Need to Know About the Indian Act is still on the Globe and Mail’s top ten Canadian non-fiction list.