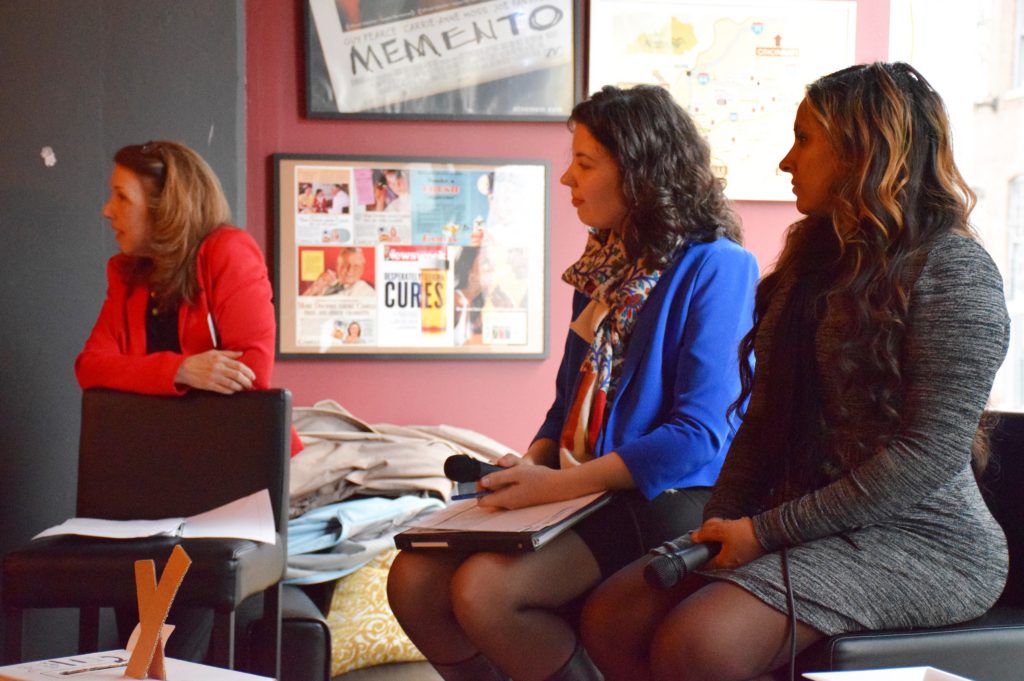 “We need these media mixers to get to know one another, support one another and more importantly, push each other to advance our interests collectively,” said Lise Lareau, a top union official for the Canadian Media Guild.

Lareau moderated a panel discussion about the distinction between one’s rights as an independent contractor versus as an employee in Ontario at Watson’s pub in downtown Toronto on April 25, 2017. The event was hosted by the Canadian Media Guild and CWA Canada.

Media workers, freelancers, union members, students and journalists came together for the evening to network and to gather tips on how to navigate the media industry from two speakers: Tassia Poynter and Denise O’Connell.

Tassia Poynter is a civil, employment and labour lawyer at Cavalluzzo law firm. Recently, she’s been helping the Canadian Media Guild with several campaigns, such as the addition of the newest member to the guild, Vice Canada Union.

Denise O’Connell is a journalist with 20 years’ experience producing for some of the largest broadcasters in North America. She’s also an organizer at the Canadian Media Guild currently working to bring bargaining rights to the reality and factual TV business.

What’s the main difference between an independent contractor and an employee?

Poynter: “The main question to ask yourself is, whose business is it? Is it your own business or are you working for someone else?”

Poynter suggests thinking of it as two realms. If you’re an employee, you have employment rights such as “conditions of work, pay, taxes, EI and CPP.” But if you’re an independent contractor, you aren’t protected by the Employment Standards Act, a fact which “a lot of people just don’t know,” Poynter explained.

Who decides whether you’re an independent contractor or an employee?

Poynter: “It’s a legal question. If there’s any sort of dispute, either Canada Revenue Agency or the Ministry of Labour decides. It’s actually not up to you or the company to really decide.”

Is there pressure for factual TV workers to be independent contractors?

O’Connell: “There’s pressure both ways. For some companies that are small and don’t want to deal with HR red tape,” classifying you an an independent contractor seems easier. “But some companies want to classify you as an employee simply because they’re afraid of CRA.”

“There’s a general misclassification of both categories just based on what’s easier, and that’s not how you should be dealing with classifications of your job,” said O’Connell.

What are the advantages and disadvantages of being an employee?

Whereas there are tax benefits as an independent contractor, as an employee “you have a T4, you take it to a bank and get financing for whatever you need, and besides that it’s the benefits and protection it affords you,” said O’Connell.

O’Connell has been an employee and an independent contractor for most of her freelance career. For her, one advantage of T4 employment is being able to go on employment insurance during slow times.

“During times when things have been dry, this money has put food on the table for me and my two kids,” explained O’Connell. “There are protections that come with being an employee such as regular hours of work and work-life balance.”

Does the compensation differ as an independent contractor versus as an employee?

O’Connell: “After all is said and done, it’s not all that different. I might get a little bit more being paid as an independent contractor, simply because there’s an understanding from the company that I need to pay for things like a laptop, a cell phone and a car.”

Can a negotiation with an employer be had about one’s job classification?

“I think people don’t negotiate it nearly enough,” said O’Connell. “The CRA really wants you to be accurately categorized, and if you’re not, there could be some significant problems with being misclassified.”

For Poynter, asking questions is key. “If you see things in your contract that you don’t understand, just ask as many questions as you feel comfortable asking and see if that opens up some space for dialogue,” said Poynter.

O’Connell has witnessed “tons of misclassification.” She’s seen some companies ask people how they want to be classified, “which is not the right way to approach it.”

Poynter: “The law isn’t really working with you in terms of better working conditions.” Only employees – not independent contractors – have the right to unionize due to the way labour law is written.

However, “if you have complete control of your work, you might not need to unionize,” added O’Connell.

Lareau concluded the discussion by highlighting that potential changes to the province’s labour and employment laws lie ahead.

“The Wynne government has opened up a massive review of labour and employment laws in Ontario,” said Lareau. “We intervened and said there should be a hybrid classification between employee and independent contractor.”

A report on this review is expected to be released within a few weeks.

“When that document comes down, I’m hoping we can count on you to pay attention to what it says and do what you do in terms of social media to talk about that document,” said Lareau.

Driven by her curiosity for the world, Shelley Pascual is an international journalist and Toronto native who has lived in Australia, Germany and Wales. Follow Shelley on Twitter at @shelleypascual.com.