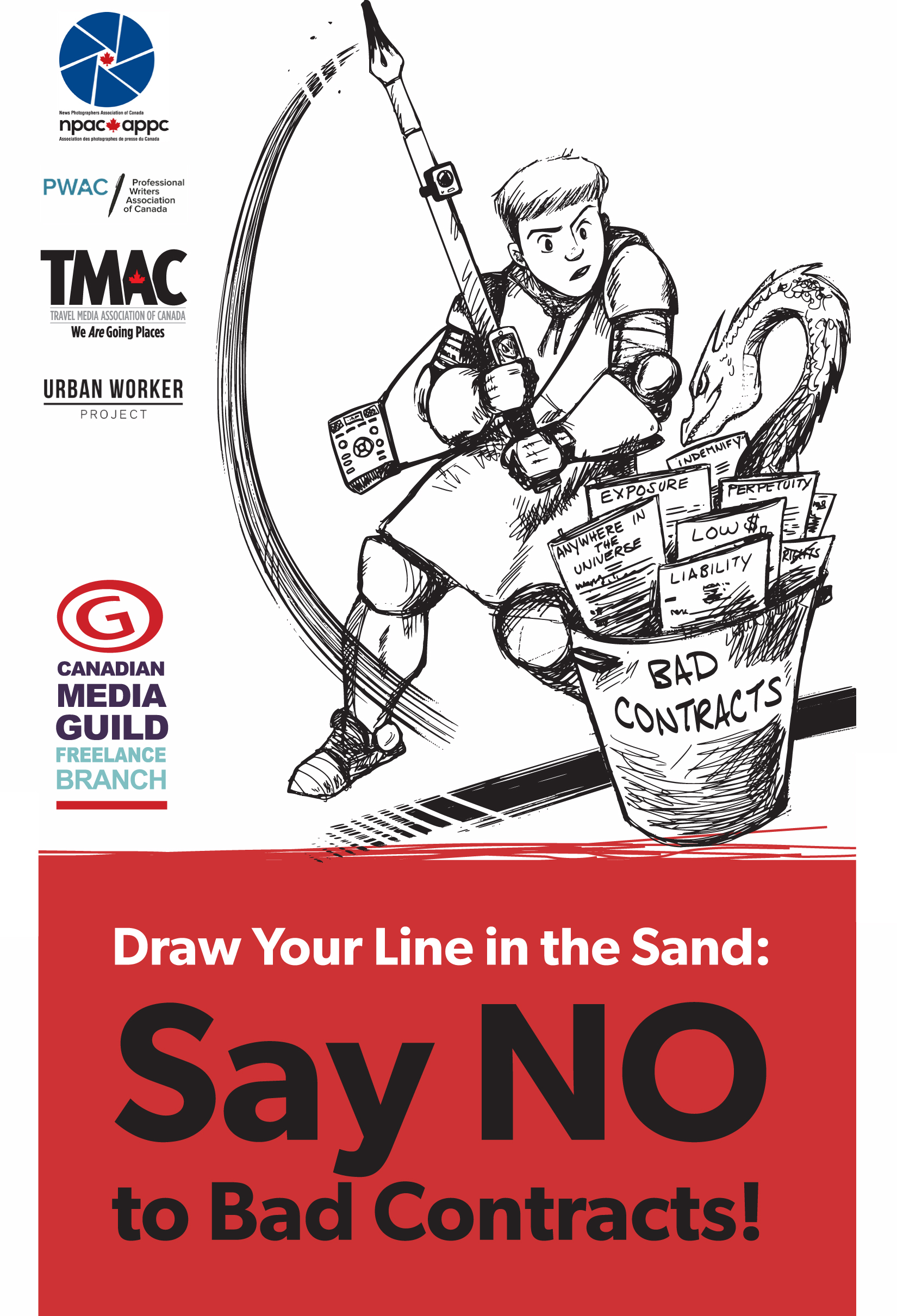 Toronto – Members of five of Canada’s largest freelancer associations have banded together to fight against stagnant pay rates and contracts that demand the right to reuse their work for no further pay.

The Canadian Media Guild (CMG) Freelance Branch, the Professional Writers Association of Canada (PWAC), News Photographers Association of Canada (NPAC), Travel Media Association of Canada (TMAC), and the Urban Worker Project (UWP) are urging their members to work together to challenge pay rates that have remained stagnant for years, and to push back on contracts that not only demand copyright but also ask freelance journalists to indemnify the hiring publishers should they be sued because of the content the freelancer has contributed.

“Low wages and unfair contracts have become just par for the course, today,” says Don Genova, president of CMG Freelance. “More and more people in the Canadian workforce are self-employed, engaged on short-term contracts that offer no job security and no benefits. At the same time, employers demand ownership of the work they produce and the right to use it over and over again without additional compensation. Needless to say, this has significant ramifications for the workers’ livelihood.”

A contract is supposed to be an agreement between two parties, says Genova. “The expectation that you should just sign whatever is put in front of you without reading it thoroughly or negotiating is clearly unfair. Yet, this is what’s presented to freelancers, often as a take-it-or-leave-it proposition.”

Many freelancers worry that even asking questions about their contracts or pay will label them as ‘troublemakers’, but in Genova’s experience in helping CMG Freelance members, “often, the people asking the freelancer to sign a contract haven’t even read it thoroughly or do not recognize some of the ramifications it contains. In many cases, employers were willing to make changes when the freelancer raised concerns.”

To that end, CMG Freelance, PWAC, NPAC, TMAC, and UWP have pledged to educate their members on contracts and pay rates for their work, while calling on employers to show more fairness in their contract language and the employment conditions they offer to workers.

This weekend in Toronto (Sept. 21 and 22), as part of the Say No to Bad Contracts campaign, PWAC and CMG Freelance have joined together to present a conference called ‘Level Up’, a series of professional development sessions, some of which are targeted at understanding and negotiating contracts. Other sessions include tips on freelancers collaborating to take advantage of each others’ specialties, and using those capabilities to secure contracts outside of their traditional markets.

Resources and background on interpreting and negotiating contracts are available on the CMG Freelance page, which is frequently updated with new material relevant to freelance contracts.