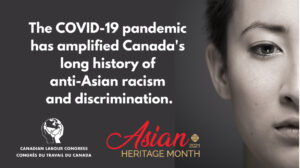 By Eva Zhu
For CWA Canada

In 2002, the federal government signed a declaration that designated May as Asian Heritage Month, with the goal of giving citizens an opportunity to recognize and celebrate Asian Canadians and their contributions to helping make this a better country.

This past year, however, has been particularly hard on Canada’s Asian population. The COVID-19 pandemic has not only put Asian people in the public eye in a negative light, but the number of anti-Asian hate crimes has increased exponentially.

Since the pandemic started, people have used the origin of the virus to justify and excuse racist anti-Asian sentiments and actions, including accusing them of bringing COVID-19 over from China. When the first cases started popping up in March 2020, an Asian person couldn’t cough or wear a mask without getting strange looks.

McMaster University graduate Diana Chu says she could sense people avoiding her when they noticed her wearing a mask early on during the pandemic.

“When I was out with a mask on, like on the bus or the grocery store, people would make an effort to distance from me in a way that was definitely more than necessary,” Chu says.

In mid-2020, there was a disturbing increase in incidents of anti-Asian hate and violence. The Georgia Straight reported that two men had verbally attacked and then tried to run down two Asian women with a car. A week later, CTV news reported that a man smashed the window of a car while two Asian women sat inside.

Monika Sidhu, who is Indian Canadian, says the growing number of such incidents “makes me feel troubled and how could someone not feel troubled? I think living in western countries, we are living and operating in societies that allow for white supremacy and ideologies that align with white supremacy to thrive and this uptick in violence and hate is something that we need to pay attention to and continue to fight against.”

There has also been a wave of anti-Asian violence — some of the attacks alarmingly brazen — sweeping across the United States.

On March 16, eight people, including six Asian women, were killed in a shooting rampage at three spas and massage parlours in Atlanta, Georgia. While the perpetrator attributed his heinous actions to a “sex addiction,” the three businesses he targeted were all Asian owned.

In cities like San Francisco and New York, elderly Asian people have been spat upon, pushed onto the sidewalk, and brutally beaten, all while bystanders watched.

Celina Wright, a bi-racial Chinese Canadian, says these racist assaults have made her fear for her family members’ wellbeing.

“The recent events make me feel terrified. Terrified for my grandparents, my mother, my cousins, my sister, and myself. I’m terrified that we could be attacked anywhere, for no reason other than the way we look. It’s sad and disgusting that people think it’s OK to hurt other people, especially ones that they don’t even know anything about except their race.”

In honour of Asian Heritage Month, especially in such a tumultuous year for Asian people, Sidhu emphasizes the importance of learning to be a good ally.

“I think there’s a lot of ways to stay informed on the AAPI (Asian American and Pacific Islander) community. First and foremost, learn the history of AAPI communities in the western world and how they have been impacted and discriminated against since they were first able to come here. Many reputable and respected publications have spoken to these topics. It comes back to being open and willing to understand, there’s so much existing content out there and you can learn about people’s personal accounts.”

If you would like to learn more about how to support the Asian Canadian and Pacific Islander communities, check out resources like: stopthespread.ca, stopaapihate.org and covidracism.ca.

This article was commissioned by the CFG’s parent union, CWA Canada.