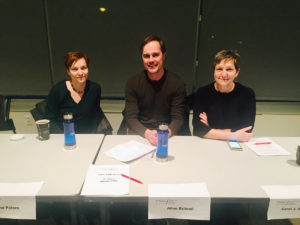 Stagnant or low rates should motivate freelancers, not make them timid. That’s according to a panel of experienced freelancers who spoke recently at an event in Toronto called “Let’s Talk Rates: How to Ask for What You’re Worth and Get Paid On Time.”

The event was hosted by the Toronto chapter of the Professional Writers Association of Canada (PWAC) on February 25 and featured writers and editors Diane Peters, Allan Britnell and Carol J. Anderson.

Peters said she disapproves of the mindset that sees cutting back on personal expenses as the best response to low rates. Instead, she said, freelancers should “push themselves” to earn more.

“Money is one of those things that motivates you as a freelancer” said Peters who, in addition to writing, teaches at Ryerson University. “You always have to hustle to get the work that you love and to make more money.”

All of the panelists said their careers have mainly been freelance, and they’ve all managed to earn comfortable incomes. It’s possible for freelancers to make between $75,000 and $95,000 a year, they said.

Anderson, who mainly works as an editor, said that, in her view, rates are always open to negotiation. “I think we’re often afraid to ask for more, and we shouldn’t be,” she said.

Getting a raise requires taking initiative, the panelists said, because freelance rates have held steady for decades and in some cases have even decreased.

Britnell, who has been a writer and editor for more than 20 years, said $1 per word was touted as a good rate when he was at journalism school in the ’90s. For many publications these days, he said, that’s still considered high.

“The bad news is, rates for writing suck,” he said. Still, Britnell estimates he’ll earn a few thousand dollars more this year than he earned last year. That’s because he asked all of his clients for a raise — and every one of them gave him an increase. His approach was simple. He told clients, “It’s been a long time. Can I get a raise?”

Many freelancers may balk at making those calls. Here are some things to consider before starting those conversations.

Anderson prefers to charge clients on a project-by-project basis. She said this can offer clients a sense of certainty because they know exactly what a project is going to cost them. She has an hourly rate that she uses when calculating quotes. Anderson said she asks to see the project she’ll be editing before giving a quote. She bases her total rate on the time it takes to read and edit a few pages of the project. She adds about 20 per cent to account for time spent doing administrative tasks for the project.

Peters encouraged writers to “factor in the pitching time” when determining how much time to spend on assignments.

The three panelists work for different kinds of clients, ranging from traditional journalistic outlets like newspapers, magazines and news websites, to corporate writing, custom content, and editing government documents. Anderson regularly responds to Requests For Proposals from government agencies. Hourly rates for federal government jobs can range between $90 and $125, she said. And it’s important to charge the going rate. If you only list $50 as your hourly rate, she said, they may think you lack experience. Anderson said these applications can be a lot of work, but she suggested that freelancers who meet three-quarters of the requirements for a request should strongly consider applying.

The panelists also suggested pursuing international work — specifically in other English-speaking markets, like the United Kingdom or the United States. Canadians can easily “cross a spelling barrier” to work for American publications, said Anderson.

Setting your rates can be difficult, so it’s important to ask other freelancers for advice. (Peters said she has asked Anderson for help.) They also said it’s important to have friends who aren’t writers; they can often become good sources for stories later. “Everyone you meet is a contact,” said Peters. “Work creates more work,” she said, but the ways in which those connections can lead to new opportunities can sometimes be “really random and weird.”

Taking on a number of lower-paying gigs can be as — or even more — lucrative than one large contract. Britnell said you need to learn what different clients expect and what their editing processes are. A project that requires many revisions may end up paying little on a per-hour basis, he said. When you’re setting your rates, you need to try and assess how much time you’ll need to put into each assignment.

Peters said sometimes it’s worth it to take a job at a lower rate because it could lead to more work, you like working with the client, or you’re more passionate about that particular subject matter. On the other hand, if you’re not very interested in the subject matter you’ll want to be paid more.

The panelists agreed it’s crucial to build a base of regular clients. When you work for clients regularly, you get a better sense of what they expect and how much work each assignment requires. You also may not need to pitch as often either, once you’ve established a relationship with editors.

Britnell was able to get raises from all his clients — but he’s also worked for many of them for more than a decade. He stressed the importance of meeting deadlines, doing good work and maintaining relationships. “Be a reasonably nice person to work with,” he told the crowd.