On Cue: Switching from Print to Podcast? It May Not Be as Big a Stretch as You Think Thursday, May 9th, 2019 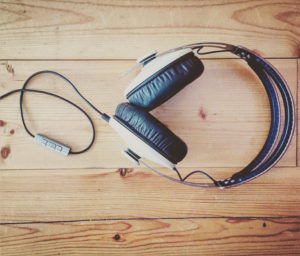 I never intended to host a daily podcast. But in March 2019, I unexpectedly traded in a notebook for a microphone and took on the role of guest-host for The Pulse, a daily show on AMI-audio that focuses on current affairs related to disability and accessibility.

Before, I thought print journalists began podcasting because of disruptions in legacy media.

Now, I think the desire to create a community with a story is what often fuels such a move – and I’ve realized print and audio have more in common than I thought.

My stint in podcasting was brief – the show went on hiatus a few weeks after I stepped in as a temporary host – but here are a few of the lessons I learned along the way.

Know what you need to learn

Liz Beatty, a magazine writer and former communications specialist, says she doesn’t view audio work and writing as very different from each other.

But the jump from print to audio was still an adjustment.

Beatty received numerous awards as the host and producer for The Native Traveler. The Sirius XM show combines live interviews and audio stories – similar to short documentaries – to describe local cultures around the world.

“It was terrible at the beginning,” Beatty says of her early radio work, recalling moments of dead air and the struggle of learning how to use a microphone properly. She worried her inexperience with the technology would eventually end her audio career. So she enrolled in courses and found experienced producers were eager to give advice.

Robyn Roste began working in podcasts in 2009 when a show at the radio station where she worked needed to be uploaded online. She and her colleagues turned to Google to figure out how to manually submit feeds. Technology is more accessible now, she says, but it may still intimidate writers.

“If you can get a little bit of training, that can help your confidence a bunch,” says Roste, who helps businesses create podcasts.

“Get comfortable with the tech, because you already have the journalism training. You know that you can tell a story,” she says.

How you tell stories differs slightly when podcasting – partly because it’s audio. My own podcast, The Pulse, was broadcast live before being edited into a podcast.

Each show opened with me reading a short essay with no background music. The thought made me want to vomit: I’ve been told my entire life I talk too quickly and my voice trails off at the end of sentences. I attended speech therapy as a child; certain letter combinations still make me nervous. Audio forced me to pay attention to my pacing and volume and choose words I knew I could pronounce clearly the first time.

Beatty encourages audio storytellers “to speak as if you’re giving directions to a slightly drunk friend” – slowly, with clear diction. Writers need to let go of the “writer’s artifice” and be more conversational, she says.

Writing something that’s meant to be heard can improve writing techniques for pieces that are primarily meant to be read. It can make you more aware of how to use pacing to keep your audience interested. Beatty compares it to telling a story during dinner with people watching and giving immediate feedback.

“When you listen to a great story, you can feel the pace and cadence of it, and you know you’ve still got the audience,” she says. “It can only make you better (as writers). Less is more. Be really conscious of the impulsion of your story, and the hook of your story, and bringing your audience along. You have to be really respectful of that.”

My openings were completely scripted, and my producer instructed me to talk to the audience, not read from my notes. Everything was conversational.

And I had to be sure to give context for information possibly unfamiliar to my audience. This meant learning to politely interject to explain a concept guests had introduced but the audience may not understand yet, or ask questions about background and terminology so listeners would have context for what they would hear later.

Krista Lamb, host of the Diabetes Canada podcast, regularly interviews top researchers and endocrinologists. While she’s become more familiar with the subjects – she previously worked for Diabetes Canada – she recognizes her audience may not have the same knowledge.

“In my day-to-day writing, I would just include a line in the paragraph explaining it or go from what I already know,” says Lamb, who studied magazine journalism. “That’s something I’ve had to really think about: how do I make sure the listener is with us?”

Lamb says podcasts appealed to her because the medium allowed for long-form journalism.

“I think it’s still a really great way to tell stories in a real human way and really connect people to the stories,” she says. But instead of interviewing multiple people for a story, she treats each podcast as “just having one conversation,” often with a few questions. She incorporates her background research into her questions.

“My hope is that you hear it in the depth of the questions and the arc of the story,” she says.

She’ll often interview others off-air as part of her research and bring those perspectives to the show’s guests.

“Guest choice is really key,” she says, noting the show favours guests who have been immersed in subjects for a long time, often journalists.

Working with a Team

Poisson doesn’t find all her guests on her own – often producers are helping with the chase. She won awards as an investigative journalist at the Toronto Star for team projects, but calls the podcast the most team-oriented journalism she’s experienced.

Even when print reporters are dividing up work and sharing what they’ve found, writing itself is more solitary, she says.

“(Front Burner) is very much working towards a goal as a team,” she says. Poisson says the whole team gave input on the script for the April 15 episode about Game of Thrones.

The producers’ role changes during different stages of a show.

“The producer has a reporting and journalist role and also an editor role,” explains Poisson. “Depending on where you are in the process, they wear many hats. They’re journalists and reporters, and then when we go into the booth, they’re like an editor.”

Producers listen during the interview and give her feedback in real-time. My own producers would sometimes speak into my headset with follow-up questions for me to ask. The producers helped ensure I remembered the overall direction we’d agreed upon before the show.

Audiences hear a host’s voice, but no host could have a show without producers who keep the narrative intact.

The intimacy of podcasts makes them compelling to listen to, and perhaps terrifying to host.

“(The audience) has a different relationship with me,” says Lamb, who says her personal encounters with listeners have been quite positive. “It’s your actual voice and they hear you. They hear when you make a mistake or you say something wrong. They follow you on social media and they have that personal connection with you.”

Hosting well requires some vulnerability: be prepared to have strangers learn more about you as a person. The Pulse included a sports update, so our audience heard my initial reaction to learning my favourite team, the Toronto Blue Jays, had traded away Kevin Pillar, one of my favourite players.

Some moments were more personal. Our show mainly focused on issues related to disability, and I would sometimes bring my experiences as a legally blind journalist to the discussion with guests, whether talking about language, building accessibility or religion.

I’ve written about some of those topics previously, but, in print, readers just see a byline. My podcast audience got a better sense of me as a full person.

Cultivating a podcast audience means bringing both your professional skills and your personal experience to the table.

On the evening of April 17, as I was getting ready for the next show, I read an email from my producer telling me the company had decided to put the show on a hiatus. I’ve worked at several media organizations undergoing significant changes. I knew this gig was only temporary, but the news still hurt.

It didn’t sting just because hosting a live interview show appeals to my love of feature writing. It hurt because I knew I’d be leaving my audience. As a former community newspaper reporter, I mourn how the closure of local media outlets deprives journalists, especially young ones, of the opportunity to form relationships that provide substance and nuance to reporting.

Podcasting did more than help me fine-tune interview questions and techniques. It reminded me that earning and maintaining the audience’s trust matters more than winning awards.

But the listeners needed a show.

I fought back tears as I slid my headphones on and listened for my cue. Then I breathed deeply, smiled widely and welcomed my guests, as always.
Meagan Gillmore is a freelance journalist in Toronto. You can follow her on Twitter @meagangillmore.